Hello and welcome to another episode of Cinema Style, but this time, it’s the ~Christmas Edition~.

For the month of December, I’ll be posting a few special festive editions of Cinema Style, exploring all things fur-trimmed and turtlenecked.

I figured we should start with a classic, and what could be more classic than White Christmas? (The film, not the Black Mirror episode.)

Now, the film itself is… questionable at times, from the occasionally stiff performances to the rah-rah-WWII numbers. Like any good Christmas flick, there’s a healthy dose of camp served with a side of cheese. But what really sticks in my mind about White Christmas, and what we’re going to discuss today, is the incredible Christmas costuming.

Released in 1954, White Christmas stars Bing Crosby (the King of Christmas) and Danny Kaye as performing friends who join up with a sister act (Rosemary Clooney and Vera Ellen) to perform at a failing country inn in rural Vermont, which is owned by their former commander in WWII. Hijinks and extravagant musical numbers ensue.

The film received a mixed bag of reviews from critics, but was a hit with audiences. It was, by a wide margin, the top-grossing film of the year. The film was especially notable for being the first filmed in VistaVision, a new technology from Paramount that enabled them to shoot a wider surface area than 35mm. Think of what a big deal it was when we first began releasing features films in 3D.

Now, the costuming in the film was done by the incomparable Edith Head, who I have mentioned in this blog before, specifically in the piece on Breakfast at Tiffany’s.

I’m not going to spend this entire post waxing poetic about Edith Head but just know: she’s a genius, she’s iconic and when I grow up I want to be her.

With Head on the team, it’s a guarantee we’ll have some incredible costuming moments, especially with the sisters Betty and Judy.

Whether it’s their “everyday” clothes or their stage outfits, Betty and Judy deliver look after look throughout the film.

Of course, the musical performances allow for all the best high-drama costuming moments. I’m talking specifically about that black dress Rosemary Clooney wears in the “Love, You Didn’t Do Me Right” performance.

The neckline. The fit. The rhinestone-encrusted gloves. The pink curtain. The drama.

Not to mention it’s super effective, when you’re performing a passionate, sorrowful song about a broken heart, to have men dressed in all black dance slowly around you. I’ve yet to try it myself but I’m sure it’s foolproof.

This particular dress also marks a turn for Betty in the film. Prior to this moment, she is the more modestly dressed compared to her outgoing sister, who is always sporting tight-fitting brightly-coloured clothing. However, as Betty emerges as Bob’s love interest and a diva in her own right, her wardrobe begins to reflect that. This can be considered a signature of Head’s skills – the emotional arc of characters being reflected in their wardrobe. (Though, Judy doesn’t really go through the character development Betty does, but she does come into herself.)

Certainly, Judy’s performances give some memorable wardrobe moments, including the Mistral Number scene, where Judy’s dance skills are showcased as much as her ridiculously beautiful legs.

Bob and Phil (Crosby and Kaye, respectively) are onstage in this sequence too, rocking some classic top hats and coattails. 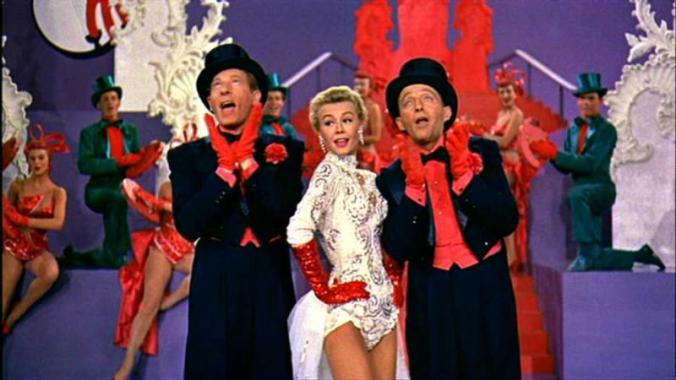 In the nature of full disclosure, the colouring of this scene actually makes me slightly uncomfortable, but that’s Technicolor for ya.

But of course, the most iconic scene and costumes come from the final musical number, where all four characters don variations of a Santa Claus-esque look. 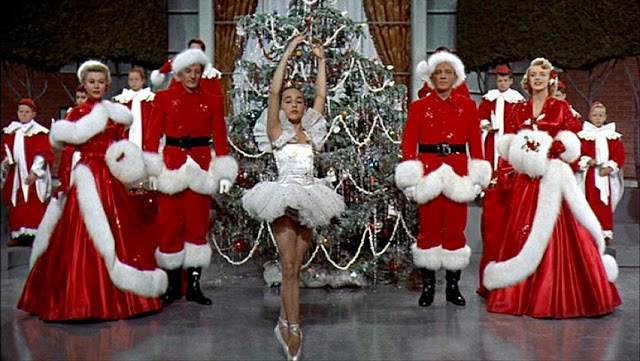 That red satin and white trim makes for a fairly literal interpretation of Christmas, but is also a classic for a reason. This is my ideal Christmas season aesthetic, and obviously is applicable to everyday life. 10/10 would wear this to the mall.

White Christmas is many things: a big-budget musical, a holiday classic, a campy, cheesy romp and a whirlwind of technicolored finery. For me, it’s full of lush, dreamy costumes that provide endless inspiration for this time of year. Also, it’s pretty great to have on in the background when wrapping presents.

One thought on “Cinema Style Ep. 4”